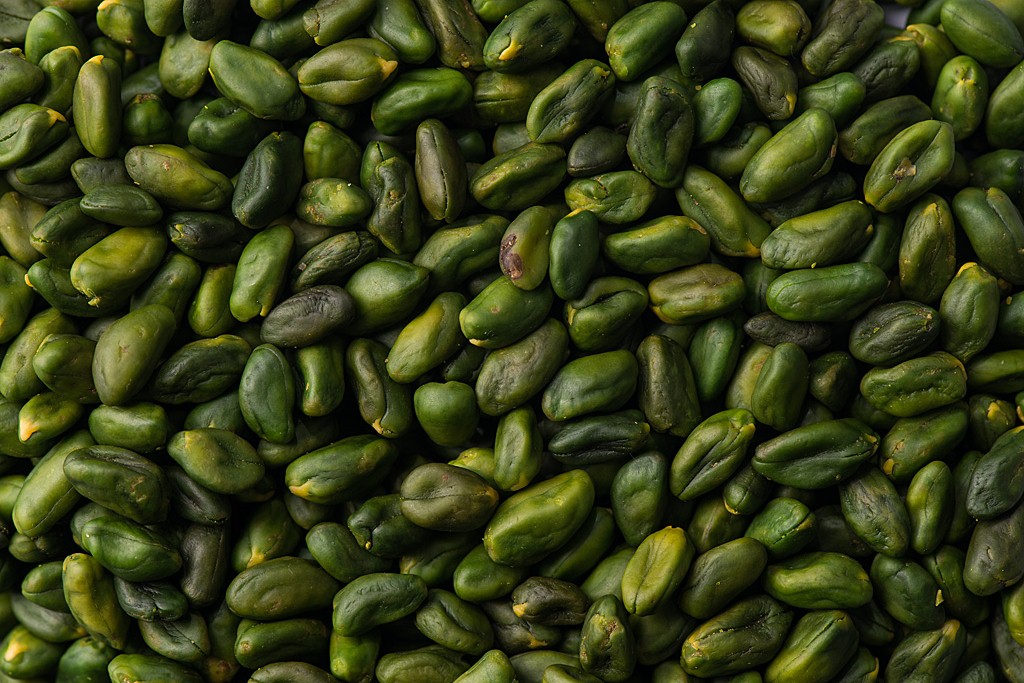 Due to early harvesting, this product is relatively raw but looks much greener than ripe pistachio. It also is quite more expensive.

The volume of nuts exported from Iran has considerably increased in the current year as compared with the previous year, official statistics showed. At the opening ceremony of the Exhibition on Nuts, Dried Fruits & Related Industries, Iran’s Deputy Industry Minister Khosrow taj announced that Iran exported a total of $2 billion worth of nuts each year. “The Iranian product is shipped to 50 countries worldwide, like Germany, America, France, England, Italy, Spain, Sweden, Norway, Portugal, Persian Gulf countries, including Qatar, United Arabic Emirates, Saudi Arabia, Kuwait, the Asian countries of China, South Korea, Japan, Australia in addition to Russia” he said. Also at the ceremony, Director of Business Development at the Ministry of Agriculture, Shajari, said the country annually produces about 200 thousand tons of pistachios, 150 thousand tons of walnuts, 1.2 million tons of dates, 35 thousand tons of figs and 50 thousand tons of almond. He emphasized that the fourth edition of the exposition was being held aiming to develop and increase production of dried fruit, find new export markets, boost exports, introduce the most modern industries and conversion, processing and packaging industries, as well as promoting employment.

ran exported over 40,000 tons of pistachios worth $381.64 million during the first half of the current Iranian year (started March 20), the Ministry of Agriculture’s news portal reported. The figure shows a 22% and 20% growth in weight and value respectively. According to the Islamic Republic of Iran Customs Administration, pistachio was Iran’s third biggest exported non-oil commodity in terms of revenues during the first half, after steel and iron ore.

Pistachio was Iran’s third biggest exported non-oil commodity in terms of revenues during the first six months of the current Iranian year (started March 20), after steel and iron ore. Iran exported more than 31,400 tons of the delicacy worth $263.6 million during the period, registering a 25% rise in volume and a 27% hike in value compared with the similar period of a year before, the Islamic Republic of Iran Customs Administration reported. Last fiscal year’s (March 2015-16) exports stood at 118,000 tons worth over $1.2 billion, which showed a 34% decline in weight and a 24% fall in value year-on-year.

Pistachio coffee as an alternative for conventional coffee

All nuts have different nutritional benefits which are evaluated in the research and studies. They needs. Some of them are …